Let me start by saying son ‘15’ is awesome. 90% of the time, he’s smart, funny, pretty thoughtful. But oh boy, that other 10% is so stubborn, so critical, so dismissive! And of course, that’s his job: he’s being a Teenager, which involves the rejection of, and rebellion against, parental control, advice, and even experience.

I get that. I did that. I did that massively, and my Mum (who turns 80 next year) would probably add that I still do. But when we’re in Barcelona, a place neither of us has ever been before, and a place I’m pretty certain I’ll never come to again, and it’s our first full day here, and I’ve bought tickets online worth $80 to get into the Gaudi-designed ‘Park Guell’, and we need to be there by 10.15am for our entry in the 10.30-11 time slot, and you, dearest ‘15’, want to watch surf movie clips on Instagram while dawdling over getting ready to go (me having been up for nearly 2 hours already, and gone to get the necessary breakfast supplies needed to fuel you), THEN I WILL GET THE SHITS (which is Australian for ‘more than slightly annoyed’, dear American readers).

And that’s after quietly and calmly asking you to hurry up a little. Three times already.

So then of course, I’ve given ample reason for the complaint about ‘How annoying you are/you’re such a stresshead/there’s no rush, we’re on holiday/relax Mum’…

Which is in direct opposition to the complaint about ‘Why do you just want to wander around, looking at stuff & wasting time/where are we going/this is taking ages/I’m bored’…

Conflicting again with the ‘How do we get there/why don’t you know the bus/train timetable?’…

I could go on. As could he against me of course. But mostly we’re not really on opposite sides, we ARE a great team. He’s great to travel with, and has been since he was very small. He will always get up instantly, no matter how early, for travel commitments like plane or train. He amuses himself with reading, playing cards, or listening to music. He usually remembers how privileged we are, and thanks me for the experiences.

But today, I’m having my whine (and no, I don’t mean ‘wine’. Though maybe I need some?)

On the train here from France 4 days ago, I shared with him that I felt most anxious about getting from the main train station to our Airbnb place (there’d already been some snapping at each other, plus we’d been up since 6.30).

He tutted loudly, rolling his eyes, & told me there was nothing to get anxious about, that I was being ridiculous- we had the directions from the host, we had plenty of time, it was lunchtime not dark, & although neither of us had the language, we’d already seen in France that lots of folk speak English. I was really hurt by his assessment of me, & fought back tears and anger for a few minutes, looking out at the distant Pyrenees, feeling rejected and criticized. I angrily asked him why he couldn’t react more supportively, more compassionately? He just shrugged, in that particular teenage way, & said ‘Because I don’t believe you need to be anxious, so I don’t want to encourage you’.

I gazed out of the window again, feeling swamped with lack of understanding and, quite honestly, a dose of ‘poor me’ victim hood.

Minutes passed. My jaw clenched, and teeth were softly ground.

Then out of nowhere, a small voice inside asked ‘what if he’s right? What if it DOES all go smoothly and easily, & this stomach- churning anxiety has been for nothing?’

Ok. Deep breath. How can I change this? How can I support myself, & also give him the freedom to be right, & learn to be responsible?

In a flash, I decided to offer him the chance to guide us to our accommodation. He shrugged and said ‘Sure’. I wrote out the directions from our host on 2 pieces of paper, so we wouldn’t have to use my phone (warnings about pickpockets were in my ears both from several people and online). He had his, and I had mine. He seemed calm, so I felt calmer.

I stood quietly and let him make decisions: he asked at the Tourist Info where to get the travel pass we needed; he got us to the right platform; he followed the directions to both exits from train and metro smoothly. We were happy! Then there was a hiccup finding the exact street (and lugging 20kg suitcases each doesn’t help), but we did it, eventually: 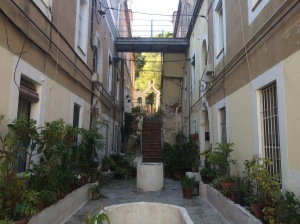 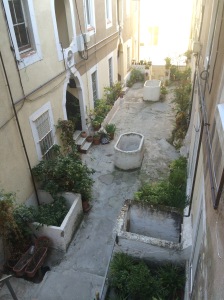 But we do need some space: we’ve been travelling together for 6 weeks, sometimes sleeping in the same room, twice even the same bed.

Two days ago we had a massive blow up. Swearing, tears, hurtful things said by both of us. He said he wanted to go home right now, could I change his flight, and that he hated Spain- pretty much the worst thing I could ever hear.

The small sadness I felt at being at the Gaudi Museum in the morning by myself while he slept in and talked with friends on Facebook  (as I try to respect his needs for privacy and socialising) simply exploded, and I ended up sobbing.

I felt small, and terribly sad. Like I’d done the wrong thing bringing him away overseas. Like I couldn’t cope with his demands; that I wasn’t good enough. I felt like a loser-Mum.

I also felt like an angry-Mum. Part of me wanted to slam back out the door, enjoy Barcelona, come home late at night, and leave him to work out his food, accomodation, and entertainment. I admit I even yanked his beloved Wifi out of its socket during the fight.

I thought desperately of the dear, kind friends I could call in Australia who would bolster me up…

And then I remembered the drama queen/victim tendency I can have sometimes- she doesn’t come out often, but I do know she’s there- I inherited her- when younger, I battled her daily- so I took a deep breath and then a shower, blew my nose, and settled down to just write.

We were two caged tigers: powerful, self-determined, independent, yet forced to live in too-close proximity.

To cut a long story short, 2 hours passed in silence, and we both got very hungry. I said nothing, and did nothing. Eventually, ‘15’ asked what I was doing, then apologised, sincerely and in detail.

I quickly replied, and we reconnected over ideas for a very late lunch… Later, he apologised again, affirming that of course he was glad to be here, and wanted to be, he was just lashing out. [Note to Self: try and remember ‘15’ is super smart, and accurate as hell with his emotional barbs- do not overreact.]

My sadness lingers, but I think it’s symbolic of being the parent of a teenager- they HAVE to grow up and move away- they HAVE to do their own thing, which often unfortunately involves massive criticism of the way we parents do things… It’s a challenge not to overreact, but we both needed to explode and let off steam I think; travel IS stressful, involving as it does being away from support networks and comfortable familiarity- I have to remember that ‘15’ is under stress too. There is also sadness in realising that he really does have a life of friends and connections that don’t involve me anymore, just as my own mother is not a huge part of my social circle. I want him to be an independent, gregarious young man, surrounded by those who love and appreciate him; by necessity, ties between the two of us must be cut, and the remainder must be loosened off. That hurts. But it hurts me way more than it hurts him, and I mustn’t lash out just because I’m in pain. As an educated adult, I also need to try and observe when he is lashing out, and not escalate the tension. Last year I did a ‘Parenting a Teenager’ 2-day course, and one of the gems I came away with was as follows: “They react 9/10 to everything. Your job as parent is to try to react 4/10 most of the time, and only do the 9/10 reaction when it’s REALLY necessary (like drink driving).”

This post has a happy ending: we found a great Paella restaurant and pigged out, then rode the final leg of the tourist bus around the port, hillside, and Gothic Quarter. We wandered down Las Ramblas, and ‘15’ ate gelato. 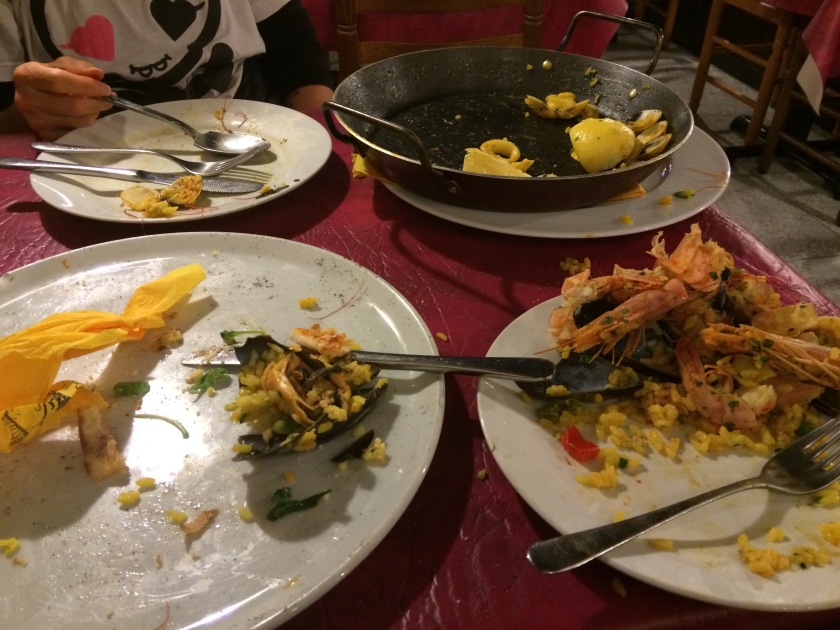 Yesterday we did another almost 12 hours of tourist stuff, including the Aquarium (his idea- seems like he is still a boy sometimes 🙂 ), and Gaudi’s home, plus an epic trip across town in the rain and dark to an English cinema, where we blissfully vegged out watching a great movie ‘The Martian’.

All’s well that ends well. But it’s been a roller coaster few days, and I’m exhausted- goodnight all, and thanks for reading ❤