‘Yes. Absolutely 100%. Totally, dedicated, committed, Yes!’ I replied. He shrugged, in that gangly, wide-collar-bone way so many teenagers have, and said:

My heart nearly burst with pride, and my eyes teared up over our cereal bowls. But I kept my cool, and made a casual remark about how great it was he thought that, and what a shame he wasn’t running the  entire world (he often teases me for my over-enthusiasm; I really don’t know what he means).

That was last year. Yesterday, on March 7 2016, the day before International Women’s Day, the Australian Council of Trade Unions (ACTU) released their updated report ‘Gender Pay Gap – Over the Life Cycle’, which sums up its findings with this nugget of shame:

“Australian women are financially disadvantaged at every key stage of their life: in childhood, at the workplace, through pregnancy, motherhood and as a carer, and in retirement.”

This is why I’m a Feminist.

I care about financial equality because we live in a capitalist system, where money equals power. And when women are consistently disempowered, it pisses me off.

The report outlines that:

Women are clearly awesome. And not renumerated equally for that. Or valued socially by those higher up in the hierarchy. It pisses me off.

But I’m not a man-hating feminist. [Oh actually, that’s not true. I do hate the behaviour of men who beat or murder their partners and/or children, while acknowledging they may indeed have had terrible trauma stories themselves; Data from SBS television Nov 2015 shows one woman is killed by her partner in Australia every week; in 2015, 79 women died as a result of violence, with an estimated 80 per cent of the deaths a result of domestic or family violence. And don’t get me started on Catholic Cardinals who cover up abusive priests for years, moving them around…]

But I digress. The final 3 points in the ACTU report seal the deal of rebellion for me, as I age [dis]gracefully:

That report is one of many reasons I’m a Feminist.

Now what does that word actually mean? According to the Merriam-Webster dictionary, the full definition of Feminism is:

1:  the theory of the political, economic, and social equality of the sexes

2:  organized activity on behalf of women’s rights and interests

We can thank the suffragettes in the late 19th century for the evolution of feminism, and again in the 1960s with Germaine Greer (can you believe women couldn’t actually vote until 1918??)

For me, it is indeed obvious: of course we’re all equal, and worthy of that parity. Certainly not the same same, but gloriously valuable in our diversity (and I include every multi-coloured, gender-fluid/sexually-orientated/non-binary/non-labelled human being that I possibly can here, as well as unicorns).

But we’re all trying to function in a system (or system combination) that is inherently broken. Or rather, is constructed to remove our freedom and sense of community, as we continue to struggle for access to resources, education, expression, and [eventually], simply clean air and water.

Capitalism combined with Patriarchy is a killer mix, and they are both ruining the world. So while I type this in my safe, quiet home in the land of milk, honey, and every organic gluten-free product ever invented, I am acutely aware of my privilege as an educated white woman, believe me.

But I still earn only 80 cents to every dollar that a man does! Fuck that. Yet I donate a percentage of my income every month to Greenpeace, Amnesty International, and the guardians of the whales, Sea Shepard. You do indeed have to Be the Change you want to see in the world.

Today is International Women’s Day. Yesterday in the car to school, ‘15’ and I talked about Catholicism/Christianity/Paganism, and how me and pretty much every woman I know would have surely been burnt at the stake as a witch. I told him I hoped that one day he found a girlfriend who was descended from a witch… [not yet though, like, not too soon, cos he’s still my baby boy forever quite young really]. He quietly agreed. This morning I reminded him to wish his many female friends a great special day, and encourage them to feel free, wild, liberated, and capable of doing anything they dream.

But the facts from the ACTU report rile me. Domestic violence murder statistics from Destroy The Joint organisation, which stands for gender equality and civil discourse in Australia, sadden me to my core.

So on behalf of every single mum, every beaten wife, every illiterate child in the developing world, and every man who feels trapped in a dishonourable role, I am a Feminist. For our suffering Mother Earth, I am a Feminist. 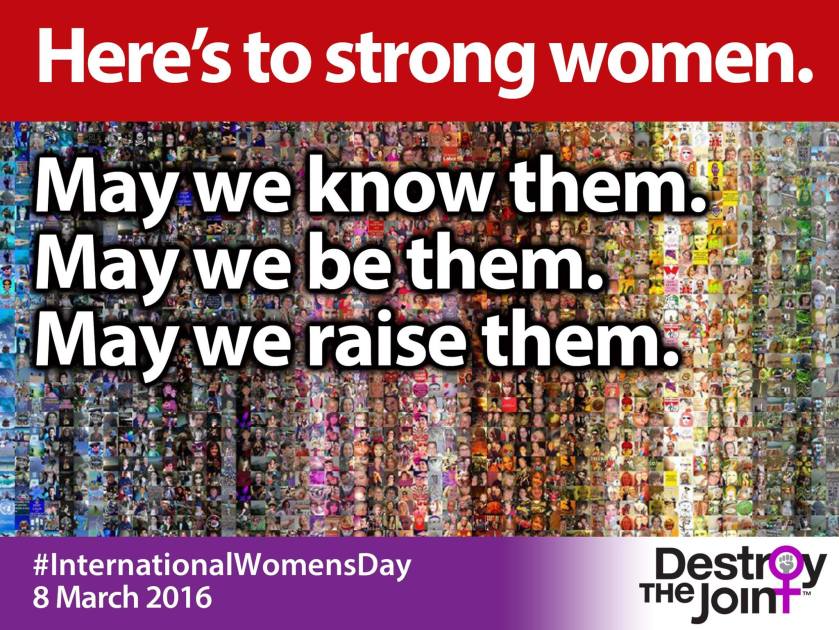 Because that’s what we all need.